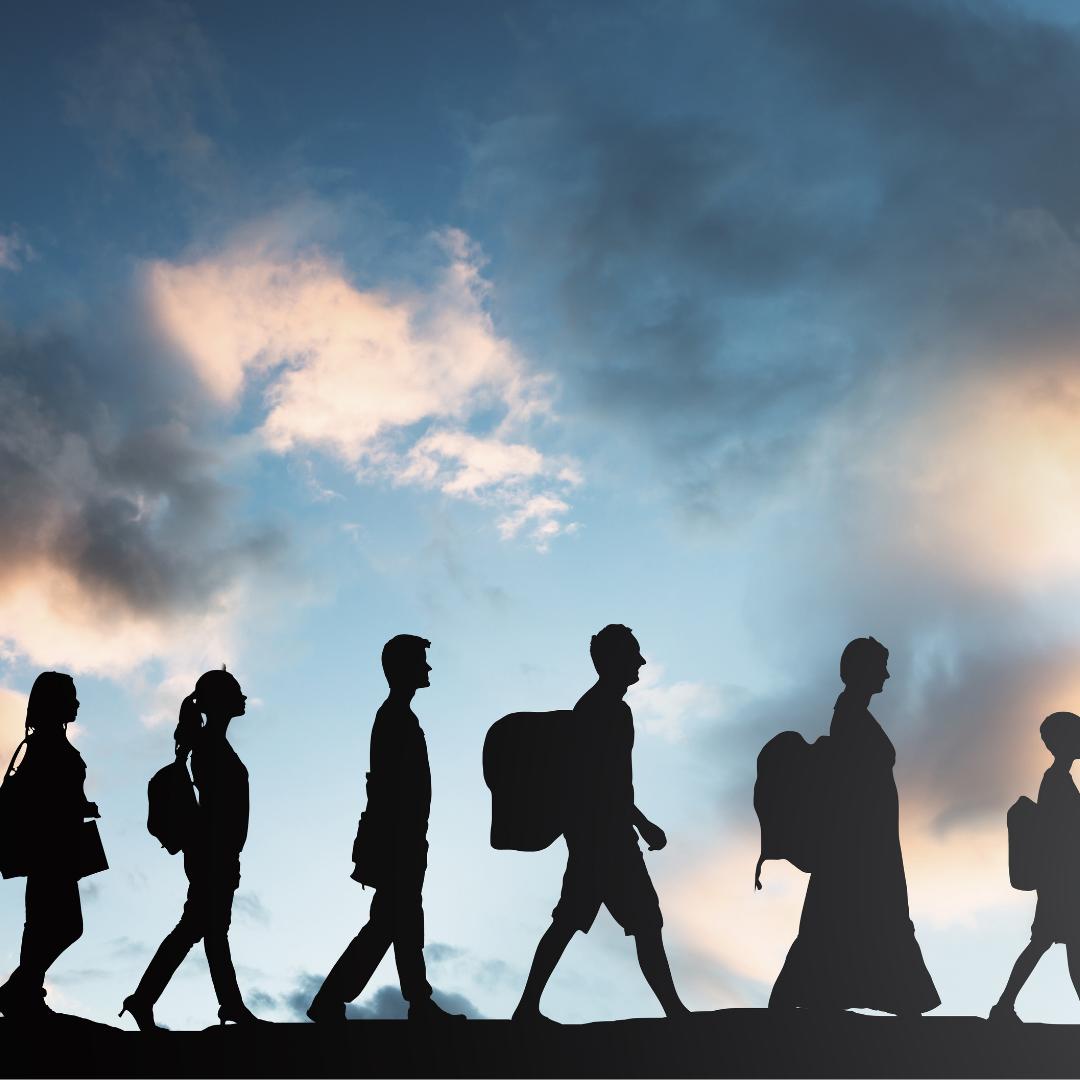 Although there are 5.1 million immigrants in our country today, concepts such as ‘immigrant’, ‘refugee’, and ‘asylum seeker’ are not fully understood. Confusion of these concepts’ meanings occurs due to people’s unawareness of the differences between them. Our goal is to raise awareness about these differences to improve the living conditions of people who left their homeland for various reasons. The purpose of this article is to identify the profile of the people who migrated to Turkey from different countries and to examine their legal status since they have become a part of Turkey. When we pay attention to media, unfortunately, we see that refugees are shown as not humans but animals. No matter what happens, we must keep in mind that they deserve a better life. They deserve basic human rights and freedom like all human beings.

As a result of the civil war, which started in Syria in 2011, nearly 7 million people had to migrate. These people emigrated to various countries, mainly to Turkey, to build a proper life. According to UNHCR’s database by 13 June 2019, Turkey has become a home to 3,613,108 people due to the humanitarian crisis in Syria. 64.1 percent of those who had to emigrate from Syria have already settled in Turkey. They are in refugee status. As stated in the 1951 Geneva Convention, a refugee is “that the unity of the family, the natural and fundamental group unit of society, is an essential right of the refugee, and that such unity is constantly threatened…”. When people are obliged to leave their country for the reasons as stated in the convention, they are entitled to benefit from United Nations’ protection.

Concepts as ‘asylum seeker’, ‘immigrant’, and ‘refugee’ have their different meanings. Asylum seekers are the people who want to be accepted as a refugee in a country within the framework of a relevant national or international document and wait for the result of their application for the refugee status. If their application is refused, they must leave the country. We are witnessing that the definition of ‘immigrant’ is used for the people who fled from the civil war in Syria, or the political vacuum in Afghanistan, or the authoritarian regime in Iran. This definition is not correct since ‘Immigration’ does not have an internationally accepted meaning. This definition is for the people who immigrate freely for personal comfort without any external coercion. This means the people who came from countries such as Syria, Afghanistan, or Iran are not immigrants but refugees. According to the article 91 of YUKK (Foreigners and International Protection Law) numbered 6458, temporary protection can be provided to foreigners who came to our borders and\or crossed the transit country’s borders to find an emergency or temporary protection if they were forced to leave their country and cannot return. These people reside temporarily in the country. In this case, we use the term ‘Conditional Asylum’. The people who left Syria and went to Europe are an example of this definition. Another term is used for people who are forced to move from their region by ISIS and PKK. These people are called ‘Displaced Persons’. They are forced to leave their residence and migrate to a safer area without crossing the border because of armed conflicts, violence, human rights violations, and natural or man-made disasters (Adıgüzel, 2016, p.20).

Not all people who came from all over the world are defined as ‘refugees’ due to the legal definition in Turkey. UN Refugee Convention included the expressions “to protect refugees due to the events that took place in Europe in 1951 and before” when it was first signed, but it was revised with the 1967 Protocol. With this revision, expressions that referred to time limitation and geographical conditions were removed. But the countries which acceded to the treaty with a declaration of geographical limitation were given the right to have this condition. According to the 1951 Geneva Convention; people from Europe, Eastern Europe, and Soviet Russia are defined as refugees. Turkey is the only country that continued to have ‘geographical limitation’ at the 1967 Protocol in the Council of Europe. This means Turkey does not accept people as refugees except they are from European countries.

Turkey, due to development, felt the need to make legal arrangements for the people who migrated to the country. Turkey is a party of a 1951 Convention and 1967 Protocol. The country made efforts to build an effective national asylum system compatible with international standards. In April 2013, Turkey’s first asylum law in the Foreigners and International Protection Act was approved by the TBMM and came into force on 11 April 2014. The Law defined the basic foundations of Turkey’s national asylum system. Then, Directorate General of Migration Management founded as the leading authority that responsible for every operation related to the foreigners in Turkey. Directorate General of Migration Management can also form policies on this subject. Meanwhile, Turkey approved Temporary Protection Regulation which sets the rights, obligations, and procedures for these people on 22 October 2014.

We should mention a few terms. ‘Destination Country’ is the term used in international migration movements means the country individuals or communities want to arrive. ‘Transit Country’ is the country where individuals/societies pass through and/or reside for a period, during international migration movements, on the way to the destination country and/or returning to the country of origin. (Çiçekli, 2009, s.19). ‘Voluntary Repatriation’ is, according to Article 87 of the YUKK (2017, p.29), individuals who have international protection status and want to return voluntarily. These people can receive financial support. Ministry of Internal Affairs Directorate General of Migration Management cooperates with international organizations, non-governmental organizations, public institutions, and organizations to maintain voluntary returns… The term ‘Irregular Migrant’ is used for people who do not have a legal right to stay in their country of residence.

What about the refugees in the world?

Around 400,000 asylum seekers move to Central American countries through Mexico’s Southern border each year. These are the refugees who flee from criminal organizations in El Salvador, Guatemala, and Honduras. In 2015, Mexico deported 166,000 refugees while the USA deported 75.000 refugees. However, despite these efforts, mass migration has not been stopped yet. Mexico has decided to launch the “Central America Minors Program” to ensure that refugees can safely reach the US border since the USA is witnessing the big refugee emigration. Since 1975, 3 million refugees are living in the USA. High crime rates and unemployment in Mexico force Mexicans to migrate to the US hoping for a better life. The USA is planning to accept 18.000 refugees with the new refugee regulation under the Trump administration. This is the lowest number since 1980.

As a result of the armed conflict in 2014, people in Ukraine had to leave their country. According to UNHRC’s data, 300.000 people applied for asylum in neighboring countries.

As elsewhere in the world, Asia is facing a huge refugee crisis. In 2016, because of the military crisis in Rohingya, millions had to emigrate to Bangladesh. According to UNHRC, approximately 711.364 people left their country and fled to Bangladesh since 25 August 2015.

Also, Afghanistan is facing a huge crisis. According to UNHRC, there are 2.5 million documented Afghan refugees. The immigration movement which started with the 1972 Soviet occupation, reach a peak with the civil war in 1992 and the occupation of the USA that followed. 6.3 million Afghan refugees emigrated to Iraq and Pakistan according to the 1990 database. It is mentioned that though there are 2.5 million registered refugees in Iran, the number is much higher than that with the unregistered refugees (Rohani, 2014, s.20-21). There are more than 2.5 million Afghans in Pakistan, its 1.6 million is registered. The refugees there are managed in cooperation with the Government of Pakistan and UNHCR. The Government of Pakistan has been in favor of the return of Afghans from the first moment they arrived. There are many incidents of ethnic and sectarian harassment, violence (especially state-based) against Afghans in Pakistan (Alimia, 2014, s.159-181). 663,295 undocumented Afghans have returned from Pakistan and Iran. Compared to 2015, spontaneous returns increased by 14% and the rate of deportation decreased by 12% (IOM 2016). After the Bolshevik Revolution that started in 1979, neighboring countries extended a hand to Afghanistan in the search of Afghanistan’s new home Ozturk (2014, p.86). This was prepared based on the work of the Presidential Archive, in 1982, which stated that three groups of Afghans came to Turkey through Pakistan.  According to the numbers involved, a total of 1006 families (4163 people) were brought to Turkey. According to the data of the Ministry of Immigration on 19.09.2020, the number of irregular immigrants who came from Afghanistan is 29,485.

Mass migrations caused by the humanitarian crisis are a big problem all over the world. This problem is not only the responsibility of the neighboring countries of the immigrant country, but it is the responsibility of every country in the world. People who have to migrate from their country have the right to live a humane life just like every other human being. We hope that each country will fulfill its responsibility to help establish a more stable world order.