The place in which we are born and live has special meaning for us. That is why migration expresses the changes in the world of meaning and value as well as the change in the place where the person is located.

The movie, “the swimmers” explains how the migration process can affect the semantic world of people and also explains the struggles of immigration by narrating a migration story of two Syrian swimmer siblings who immigrate from Syria to Germany. While the two siblings were living in Syria as swimmers preparing for the Olympics, with the outbreak of the civil war, they decided to immigrate to Germany and take their families with them after they left. The siblings as professional swimmers who depart from Syria and reach Germany by passing through Turkey, Macedonia, Serbia, Hungary, and Austria find accommodation and can train with the help of a helpful teacher. Then, the older sibling joins a civil society (non-governmental organization) to help the people who immigrate like them while the young sibling competes on behalf of the refugee team at the 2016 Olympic competitions.

Swimmers as a movie does a good job of reflecting the struggles of the migration journey. The trip of the siblings which started with a plane continued with a boat, bus, car, and sometimes long walks. We observe that they are faced with lots of threats such as traveling in a broken boat, choosing between accepting high-paid intermediaries or being caught/trapped by the police, staying in unsafe places, being harassed, and jumping over barbed wire.

If we examine the Turkey part of the migration journey, we observe two important situations. The first one is training scenes and the second one is the phone call with the Turkish Coast Guard.

While the first event, the personal training of the leading role in Turkey, is held in a small/restricted environment with objects resembling the bars in the prison or the wire mesh in the prison, in the training held in Germany, there are training scenes in many different areas in the ongoing flow of life. Because of this situation, we query that Is there any distorted perception of freedom. (The mentioned scenes are at 30:00 and 1:30:45 minutes of the movie.)

Starting from this scene, making a statement that Turkey wanted to be shown as a country that does not take good care of Syrian refugees is not correct.

In addition, the fact that they have to enter other countries illegally while they can travel safely to Turkey by plane can be said to create an image that Turkey’s approach to Syrian refugees is not negative.

Another noteworthy country in the film is Greece. If we evaluate the film based on Greece, three events stand out:

First of all, the first moment, refugees arrived in Greece and they wanted water from citizens but citizens said that ” There are no refugees, no.”. This sentence reflects the attitude of Greek society towards Syrian refugees. (The mentioned scene takes place at 56:30 minutes).

The second situation is that the Greek flag is not included among the symbols/emblems of the NGOs assisting in the scenes where the needs of the immigrants are met. (The mentioned scene takes place from 58:00 minutes.).

The final case we want to stress is a phrase in the movie that is “Sara and her colleagues were arrested for human trafficking in 2018 by the Greek authorities because they were helping refugees. The fact that one of the main characters, Sara, wants to return to Greece and work there through a non-governmental organization can be understood as a Greek embellishment at first. However, this phrase we see at the end reveals that this situation is a beautification of the non-governmental organizations working there, not that country. (The mentioned scene takes place at 2:07:44 minutes.)

When we think of migration as going to a place where life, environment, and opportunities should be abandoned and everything should be created from scratch, we can understand that this journey includes hopes and fears of a person’s new place. A struggle is required to get used to the destination, to establish a new life here, to hold on to or let go of the material/spiritual possessions, and most importantly to survive. People experience the struggles of migration in different ways. The migrant’s background, abilities, and struggles are reflected in his/her action. We can see this both as a way of coping and as a richness that he/she adds to the destination.

One of the most important points in the movie is that the siblings find their way in their struggle. While one of them focuses on developing his talent and competes for the “Refugee Team” in the Olympics, the other sibling joins a charity to help immigrants who are facing similar difficulties. Both ways make it easier for siblings to adapt to this foreign place that they have just come to, and in this way, they both support their mental health and enrich the place they are in. It also contributes to hearing and seeing the difficulties and meeting the needs of people that are living in similar situations. 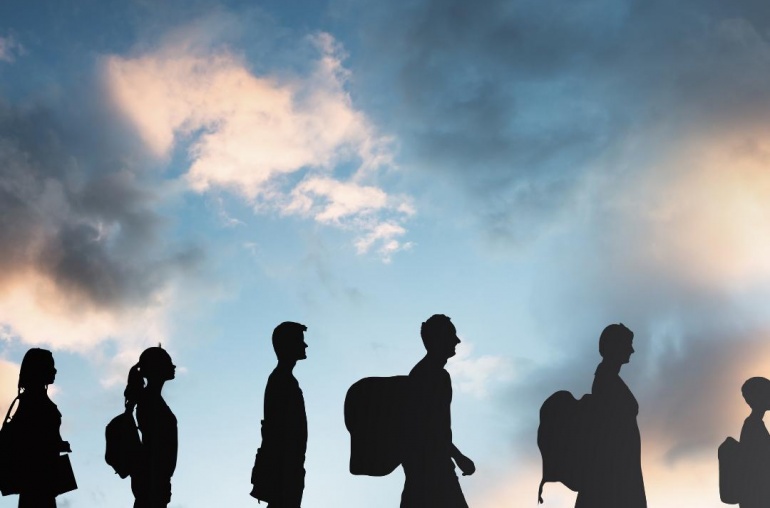